Comments Off on The evolving workforce

Anywhere working: Finding the office of the future

Anywhere working: Finding the office of the future 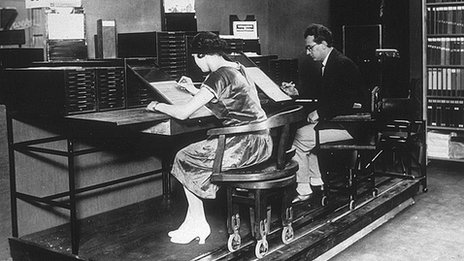 In the 1930s the office of the future was all about ‘flying chairs’. Where is technology taking us in the 21st century?

The world of classical music doesn’t immediately conjure up visions of a bright new technological dawn.

But just as a company needs to invest in technology to keep a mobile, flexible workforce competitive, so does a world-class orchestra. It is, after all, a business like any other.

The London Symphony Orchestra (LSO) has 80 musicians who travel the world performing and recording, and a staff of 75 who run the office, their London venue, music label, and education division.

“For a lot of the time the orchestra is away from the Barbican, which is our main base,” says Jeremy Garside, the LSO’s head of technology.

“Their support team, particularly the orchestra managers who look after the day-to-day running of the orchestra, are probably away two-thirds of the time from our core base.” 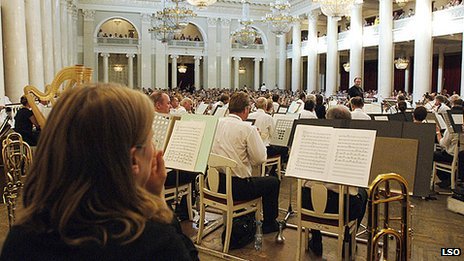 The need to upgrade the organisation’s ageing telephony network and IT infrastructure gave them the chance to introduce flexible working on the move.

“If you’ve got a session in Abbey Road studios, or a film recording session, or are in an airport, it isn’t always possible to get through on a mobile, they’re often switched off,” says Mr Garside.

Getting rid of ISDN lines has produced cost savings, and the ability for the management team to log on to their laptops and make decisions in real time whether in New York, Beijing or London has made the organisation more agile, says Mr Garside.

This might not seem to be a particularly new scenario.

But there’s a growing body that sees this as the first steps to a vision of the future workplace, where, thanks to technology that keeps us constantly connected to the office, the office is where you are.

So how does this particular version of the future work?

As part of this, the company has put its money where its mouth is and is in the process of rolling out fundamental changes to the way some of its European offices function.

The catalyst for this was its Dutch office in Amsterdam.

The general manager there, Theo Rinsema, was faced with a cramped office environment and a workforce who were selling a philosophy to customers that had little to do with the way they themselves were working. 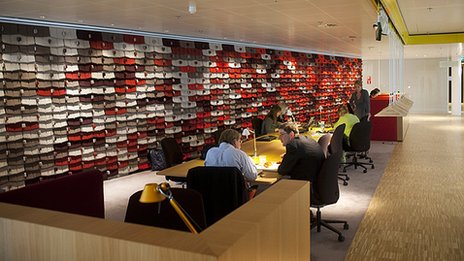 At Microsoft’s Amsterdam office staff have no fixed desks, and choose where to sit depending on the type of work they have to do that day

He decided that the best way to sell an idea was to show it in practice.

This meant a new, custom-designed office, a big investment in unified communications and cloud computing, as well as employee training and support.

Staff – including Mr Rinsema – no longer have a desk, and are encouraged to decide where they work that day based on the tasks they have to do.

This could be in the open area on the first floor that includes a restaurant, coffee bar, meeting rooms and breakout areas, a private room on another floor or a hot desk.

They are also encouraged to work from home where possible. Line managers work with staff to draw up delivery schedules and expectations.

Microsoft’s Klaus Holse says there are a number of things to consider.

“You’ve got to be thoughtful about what you’re doing, because not all positions in a company are created equal.

“If you’re in the HR department for example, the physical requirement for you to be at the office is probably higher than if you’re a consultant.”

Being clear on what is appropriate when working from home is also important, says Mr Holse.

The result, according to Microsoft, has been a happier workforce, increased productivity and higher sales as well as cost savings. The new office has half the floor space of the old one, but capacity isn’t an issue.

Connecting the workforceMicrosoft isn’t alone among technology giants in predicting a flexible future for the average office worker. Dell recently published the second report in a series on what it calls the evolving workforce.

“I think the workplace of the future to me looks like a connected, enabled, empowered knowledge worker,” says Dell’s Bryan Jones.

“[It’s] an employee who is less bound by physical location, by conventional work hours, and the performance of that employee is judged more by the output and indexed towards quality of output rather than the number of hours worked.”The study found that developing economies such as China, Brazil and Mexico had been quickest to adopt flexible practices. One reason for that is a lack of existing IT infrastructure, says Mr Jones.

“They’re able to skip a generation of technology and go directly to it. I think it speaks to the entrepreneurial spirit that we are seeing in developing countries as well.”

Mr Jones believes that companies that fail to adopt a more flexible approach risk being unable to attract the brightest and best.

“I would say that companies that are categorically saying they’re not willing to embrace these types of opportunities, I would say you’re going to miss out on a level of employee-led innovation that will be debilitating to you long-term.”

However the research also highlighted the fact that it was not just the younger generation that was pushing for different ways of working.

“It really doesn’t matter what age group you’re in, it really depends more on how the individual employee or user has embraced technology.”

“All companies are concerned about their bottom line. And one of the biggest items of cost for a lot of companies is business travel,” says Jean Leston, senior transport policy adviser for WWF UK.

“And if there are ways you can cut that means you can save money. And the cost of business travel is only going to increase with the cost of oil.”

The charity works with the Anywhere Working Consortium, a body that includes companies like Microsoft, Nokia and Vodafone, to promote home-working and video conferencing among other things.

“If you’re working collaboratively but using technology instead of face-to-face meetings you’re able to meet more often, and you’re able to make decisions faster, so you can get your products to market faster.”

The charity is in the process of building new offices, where remote working will be encouraged – as will public transport, as there are no parking facilities.

This is just one possible version of the future – and it’s one that is probably most applicable to the knowledge – or office – worker. A manufacturing production line is unlikely to relocate to your front room anytime soon, for example.

For some businesses, allowing staff so much free rein may seem like a step too far, and for others dealing with sensitive customer data, too risky.

But for Philip Ross, chief executive of Unwork.com, the evolution is not complete.

His organisation studies attitudes towards work, and has just completed its 2012 Unwork.com annual survey.

“Work is very much housed in a container and that container has been around for about 120 years, at the white-collar workplace.”And by and large most people still commute day in and day out to a container for work.”

This year’s survey found that 71% of respondents had not adopted home-working or telecommuting, citing the fear of isolation and the need to be seen in the office.

“What that says to me is that people still want to get out of the home, they don’t want to be home-workers, they want to come in and they need that kind of buzz.”

This doesn’t mean we will stay in the office environment though. Philip predicts that as well as home-working, people will use other spaces to congregate and work outside the office. With around 45% of office desk space vacant at any one time, according to Unwork.com, this could lead to significant savings.

“I think that you will find a different set of rules. The office will still remain the brand, [but] it will be the representation of the business, the anchor point and the place for people to come to do prescribed tasks.”

Comments Off on Anywhere working: Finding the office of the future

Comments Off on Floating stadium proposed for World Cup !

“So while the Middle East offers amazing opportunities for North American office furniture makers, it affords those same opportunities to companies around the world. Wait too long to join and the market will be full” – MMQB 5/23/11

The GCC’s healthcare sector is set to grow by an annual rate of 11 percent and will be worth nearly $44bn by 2015 – Alpen Capital.

Demand for hotel rooms in the Middle East grew by nine percent in 2011, the highest growth rate in the world – STR Global.

Abu Dhabi plans to build 100 new schools in the next decade to meet the increasing needs across the emirate.- ArabianBusiness.com

The outlook for the commercial fit-out segment in the Middle East Region remains vibrant in 2012 as contractors look to support new infrastructure projects. North American products continue to be sought after by the region’s specifiers and end users, with an unequalled reputation for sustainable, design-lead products, manufacturing quality and after sales support.

Co-located with the Hotel Show, The Office Exhibition 2012 is the Middle East’s industry platform for premium office, health, education sector design and fit-out solutions and is the gateway to the business opportunities across the region.  A must-attend event for the region’s architecture and design community, the show attracts visitors from across the wider Middle East and Africa.

As the North American agents for the Office Exhibition and Hotel Show, Independent provides a range of options including location within the North American Campus. Packages can be full turnkey, including premium space, stand build, show handling, international freight and an extensive marketing package in a very affordable package. Stand sizes are extremely flexible so as to best suit each exhibitor’s needs and budget.

We look forward to hearing from you and bringing your products to this rapidly growing market.

Work on Abu Dhabi’s new terminal to start in Q2

Work on Abu Dhabi’s new terminal to start in Q2 http://t.co/mALdTpHY via @ArabianBusiness